Updates from ZEE TV about new shows, launches and more… 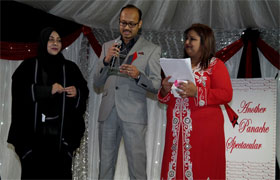 In remembrance of these extraordinary women Zee TV supported the Women of Wonder awards which was held on Friday - 5 August 2016 in Lenasia, Johannesburg.

The awards recognised 50 modern-day, well distinguished women who are making a difference in their community and country as a whole.

Zee TV Africa CEO, Harish Goyal presented these awards to the much appreciative recipients. He said, "Women represent strength and without them we will not be here today. We need to respect and protect them and treat them as equals."

The awards recognised students promoting education and fighting for better learning conditions, nurses who treat the ill, business women who are tackling an industry previously driven by men and so many more women who are an inspiration to us all.

The event was certainly one to be remembered and Zee TV Africa was privileged to bring a sense of â€œUmeedâ€ to the community in celebration of the 21st National Women's Day.
Back
Tweets by @zeetvafrica